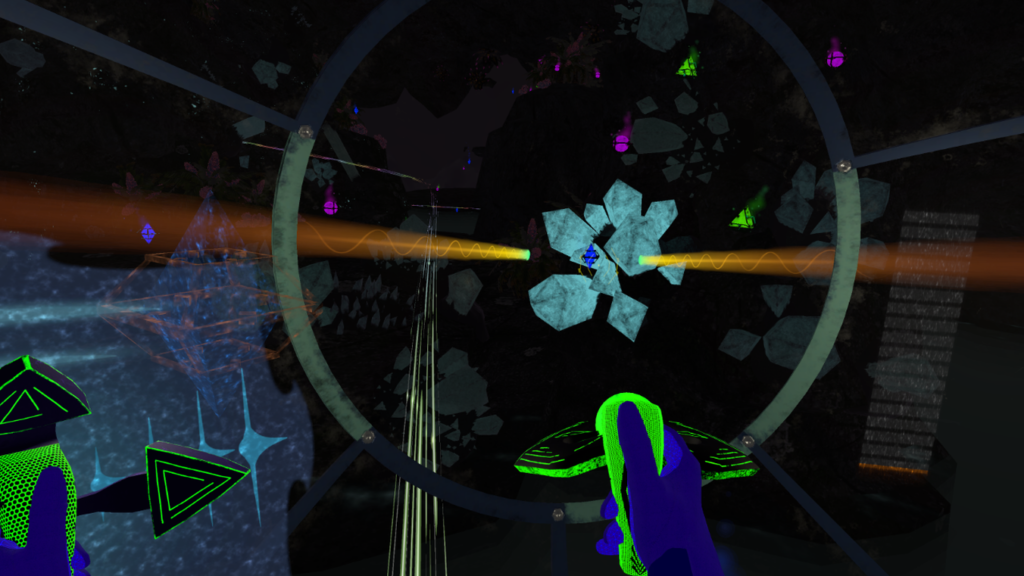 OBJECTIVE: Create a VR experience to compliment the functionality of the RotoLoco ride made by New World Rides

CONCEPT: A two player virtual reality experience that fully immerses the riders in an alien world

See the Game in Action

You can play Shuttle 39 now at the Railroad Square Art Park!

Shuttle 39 is a two player virtual reality experience created to highlight the functionality of the RotoLoco ride which allows the players to rotate 360 degrees on 3 different axes. One player controls the rotation of the vehicle, while the other one controls the cannons and

shoots at the “powerups” in the game. The players must work together to escape the alien cave by collecting enough power ups to repair their ship and make a safe return home.

World Building is all in the details

You will find plenty of hints to the fictitious company responsible for your adventure in space!

Original Music from Our Composers

Working collaboratively with the team at New World Rides we created an experience that fully immerses the two players in an alien world. Our artist’s role on the project was asset creation for the VR experience players see while on the RotoLoco ride. The scenery for shuttle 39 is inspired by underground crystal caves. Ours features mysterious creatures and plant life all with bioluminescence to adapt to dark environments. Color and emission work together to pull the player’s attention towards their current goal at any point in the game. These are a key feature of the alien technology surrounding the player which is what they use as controllers, and what they are collecting to complete the mission.

The “alien technology” that you see around the level was designed to look ancient and mysterious while being far more advanced than the technology from earth. Included in the “alien technology” are the controllers, the powerups, the “Collector Cannons”, the “Shape Gates”, and the “Carrier”.The alien tech is juxtaposed with the “Shuttle 39” ship which is fully branded with the logo of the “space tours division” fictitious company called “Internaptic”. The logo and color palette were created to emulate a young company who has seen very quick success. The “space tours division” is one of the many ventures of this large corporation.